I lived on a roller coaster ride for the last eight weeks (and hung onto my might by the hairs of my chinny chin chin). For some, a roller coaster is a voluntary thrill-seeking joy ride. For me? Never. I don't see it any different than turning on my vacuum and inserting the hose into my mouth. No, thank you.

March's roller coaster was testy. It wasn't easy and it wasn't nice. As sickening as roller coasters are, whatever comes down can always roll back up.

Down:  March began with Boy's new family friendly schedule in the ICU.
Up:  In like a lamb--sunny blue spring skies.
Down:  The 'diary' continued for more than a week to end its course. Coughs and runny noses then kept us locked away from civilization for another four or five days.
Up:  We tried almost every flavor of Gatorade. Up:  After a hard day of the sickies, Little Blue Eyes climbed up the couch and lay his head on my lap, asking for me to stroke his hair. For the first time ever, without being prompted, he looked up at me from my lap and said, "I love you, Mom." He added, "You're the best Mom." Happy tears for me that night.
Down:  The same little tender-hearted boy found me with sad tears the next day as I was kneeling in prayer. "Why are you crying, Mom?" he inquired as he tried to uncover my face buried in my arms. It wasn't long until his two little feet made off downstairs to alert his sleeping, overworked, post-call dad. "Mom sad! Mom sad! Wake up, Dad! Come help me!"
Up:  We had family come to visit for a few days.
and higher: We spent a day in Boston, ate at my favorite breakfast place in Hanover, and shared favorite places in the Upper Valley with them.
and highest: Boy had a day off to see them and we made the most of it.
then down, down, down: Their presence lasted only a few days and then they boarded a plane home. Up: celebrated the birthdays of the two boys in my life.
and still Up: went to the theater to see The Hunger Games with girlfriends I barely ever see.
Down: got sick on my birthday.
Lower: ICU got the best of Boy. His poor brain got fried. A little amnesia maybe?
Lower: then it snowed...a little.
Then up...up...UP: a belated birthday surprise and weekend getaway to the Maine coast.

Life wouldn't be a life without multiple highs and lows, but with March ended on a high, I'm content that this triple birthday month didn't crash and burn. After celebrating my 30th birthday--for the second year in a row, this year has finally started right after all. Gratitude
turns what we have
into Enough.
--author unknown Summer decided to leap frog over Spring this year.

The first day of Spring brought us a balmy sizzling 80 degrees. Weird. This confusing heat wave continued all week long. My kids, running barefoot on our brown matted down grass, wore bathing suits instead of what normally should have been snowsuits. Yet, all I could think of were our poor maple syrup farmers. No sugar-on-snow this year. Bummer.

The freckles on my nose are beginning to appear again--hello, sunshine! Mud season? What mud season? My Indy girl, like a true Midwesterner, ain't buying this nonsense. She knows fickle sunshine when she sees it. If there's one thing about Spring that I don't miss, it's tornado season--and this year, it wasn't at all kind to this little girl's home state. So far, New England hasn't produced the extreme weather that I've been warned about.

For now, we're counting our (limited?) days of sunshine as days of outdoor fun. Pretty soon, April will surely give us lots of rain, mud, and all sorts of bugs and baby ticks. Can't wait.
Posted by Britta at 3/25/2012 Links to this post

Flavor of the Month

Before sugaring season in many parts of Vermont ended earlier because of the unnatural Spring heat, I got to see a maple syrup farm live in action for the very first time. 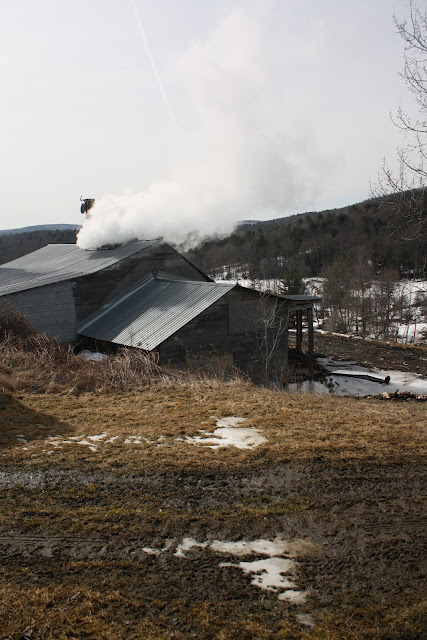 To see a live-working, sap-boiling sugar house is a unique amenity of living in rural New England. At only a short drive away, we can see a long-standing tradition that has made Vermont's sugar maple trees famous. While there are places I've seen that still tap trees from traditional metal buckets, the modern-day way is through a series of tubes weaving through the trees. 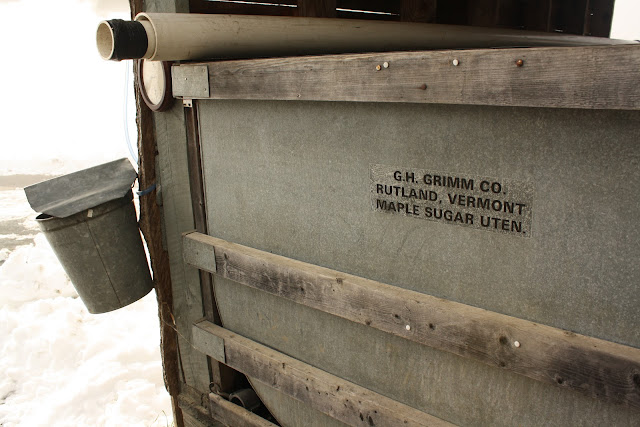 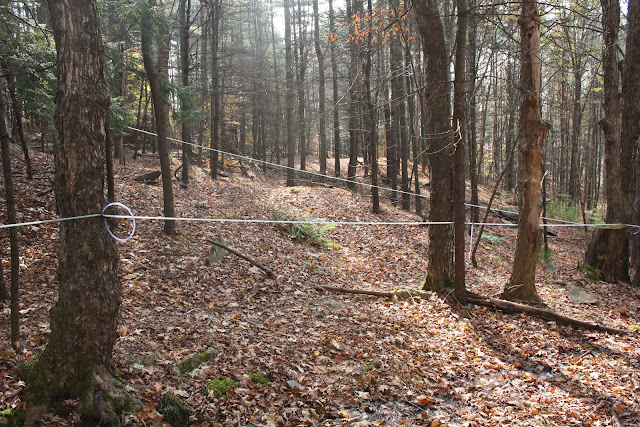 The beginning of March marks the start of sugar season. To put it all simply, sap is collected after a cold night and a warm day, loaded into big white tanks, and hauled to a sugar house by a tractor.

I'll let you follow along with pictures to see it travel all the way down to our favorite sugar house. 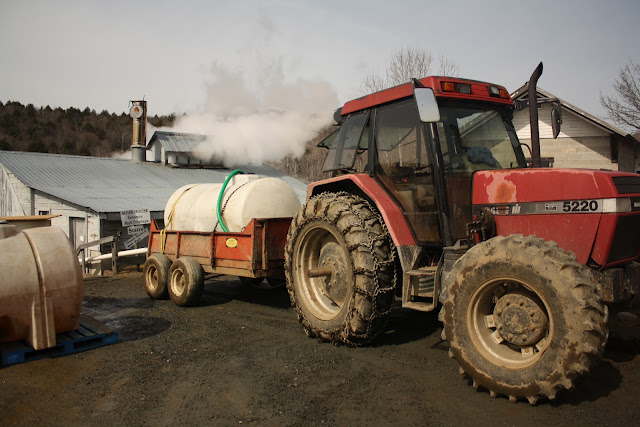 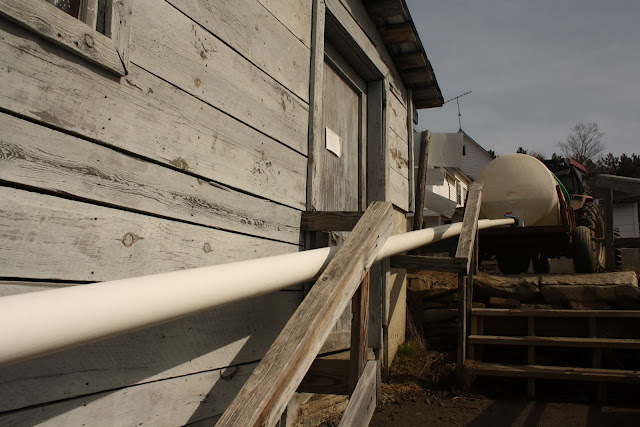 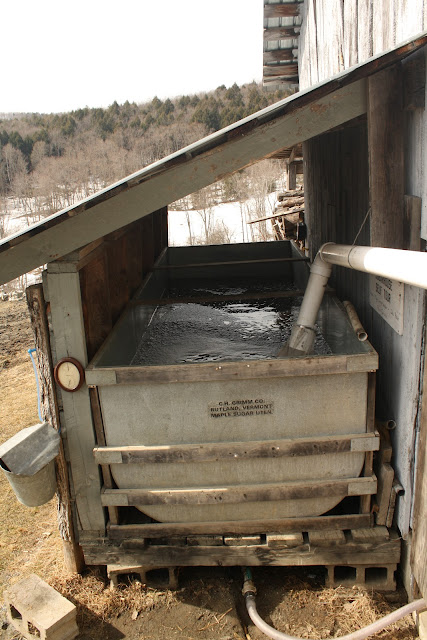 The white pipe from the tractor takes the sap to a holding tank, and then the white tube across the bottom takes it inside to be boiled. After it has been boiled (after tons, and tons, and tons of water has been evaporated), you've got delicious maple syrup for drizzling atop a stack of your favorite buttermilk pancakes. Or for marinating your favorite breakfast sausage. OR (my recent favorite) for sweetening a berry New England pandowdy.

Wonder why it's so expensive? Perhaps because it takes roughly 50 gallons of sap for every gallon of maple syrup. Just my theory. 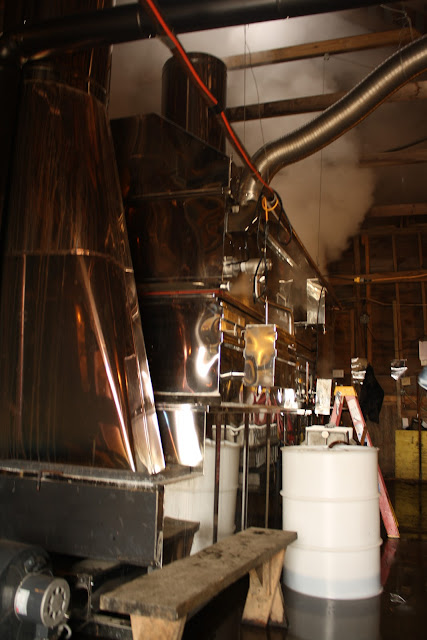 The different grades of syrup is determined by the weather. This year, I've been told most of this year's tapping has produced lots of dark amber. Blame it on the warmer-than-usual winter that we just had.

Did I get that right, Vermont?

I have nothing against New Hampshire's maple syrup--my loyalty is with the Vermont brand. We just don't bother buying the less famous kind.
Posted by Britta at 3/24/2012 Links to this post

After eighteen solid months of nothing, two little piggies have finally come out to play. Words cannot describe the joy I feel to run a comb through those tiny wisps of Indy's hair. All of that Barbie brushing and styling I did in the 80s and early 90s was not done in vain.
Posted by Britta at 3/19/2012 Links to this post

Beware the Ides of March

Last year on March 15th, I was with my mother and two kids at the airport looking forward to a flight back home. After I had rolled in my luggage for the skycap to slap on some tags, he asked to see our boarding passes.

"And for him?" he probed, nodding over to my son.

"He doesn't have a ticket because he's not quite two yet. He'll be sitting on her lap." I said, pointing to my mom.

"Do you have his birth certificate with you?"

"In order for him to be a lap child, he needs paperwork proving he's underage."

I was stupefied. Stuttering in shock, I explained to him that I had never been asked this kind of information before. He apologized (yeah, whatever) and directed me over to the check-in desk.

I've traveled a handful of times before, and not once had I been asked for a birth certificate. Dude, does he really look like a two-year-old? Have you heard him try to talk? A month previously, we had a much-anticipated flight to see our faraway families on a one-way ticket from a different airline. The airline was provided with his birth date when asked, but nothing more.

"I'm sorry, ma'am. It's our policy and you'll have to purchase another ticket," droned the woman behind the counter. Behind her unapologetic eyes, it was as if she were saying to me, Did you really think your lying, cheating face was going to get away with this? You can plead all you want. I feel no sympathy for you. All we care about is your stinking money.

I repeated to her what I said to the skycap: My son wasn't two...I've never been asked for documentation before...my mother was accompanying me on the flight so I could manage the airport and a four-hour flight home with two children under two...I was trying to get back home on the last possible day before he required a plane ticket. My jaw was quivering and the tear drops couldn't be kept at bay any longer.

And then somewhere in my blubbering, I mentioned that today was his birthday.

"Oh, so he turns two today? He'll need a ticket then."

Something about her tone of voice, made me lash out my infuriation.

"Excuse me. If you're going to be technical with me, he's not two years old. Not until 11:28 tonight, if you really want to know."

I don't recall what she retorted back at me, but the airlines won of course. If my anger bubbled up any further, it's quite possible that I would have been escorted away in handcuffs. Now that I think of it, I had never traveled on this particular airline since I had kids. And never will I again.

A few hours later while we were miles above ground, I was still rattled. What if we had traveled the day earlier? What if Boy had the day off then to pick us up from the airport and not today? What if I had behaved out of control in order to gratify my frustration? What if my mom wasn't at my side so I could cry like a little girl into her shoulder? What if I had an all powerful blog that could persuade my millions of readers to boycott this airline to their everlasting doom? What if the airlines discovered that their billions of lost profits came directly from my almighty blogging power and begged me for their forgiveness and a full refund so I could graciously nod my royal head to end their annihilation? I remember looking at that surprisingly behaved little boy next to me and thinking, "Happy Birthday, Finn."

A year later, the Ides of March turned out much happier. And the kid can speak in sentences now. Lots of 'em. And he's technically not quite three yet.

To the best dimple-faced, blue-eyed, mop-headed, energetic, Curious George-loving, seeker of all things fun and novice bookworm that I know: Happy Birthday. I have yet to travel on an airplane again. And I have yet to make a cake worthy of being proud of.
Posted by Britta at 3/15/2012 Links to this post